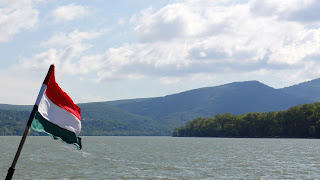 Danube bike trail follows the river all the way from Germany to Ukraine. It is nearly 3000 kilometres long and propably the most popular bicycle touring route in Europe. Because of limited time we only cycled the 370 kilometer section from Vienna to Budapest. However, it was still a week long journey full of experiences.

Unlike others who rented bikes from Vienna, I wanted to take my own touring bike with me. The first challenge was obviously getting the bike into the plane. At airport I managed to pack my bike into a cardboard box just two minutes before check-in closed. Since I was travelling with a low-cost airline with hand-baggage only, I put all my bike bags into the bike box. Pedals had to be removed, handlebar turned and tires deflated. Additionally, I had to remove the front wheel since the bike would not have otherwise fitted into the box.

The plane landed in Vienna at midday. I would have preferred a straight flight since every time a bike is handled at the airport it might be damaged. However, clearly the cheapest flight to Vienna was via Riga. Regardless of that, everything went well and I was able to ride my bike out of the airport. Finding a bike path to Vienna center was a harder task. After cycling half an hour along a road with moderate traffic I decided to take a train as there was a station by the road. Additionally, I had catched a cold just before the trip so I had to take it easy. After I arrived at the center, I cycled to the hostel where my cycling companions already were.

As I was still feeling sick in the morning I decided not to cycle the 80 kilometer route to Bratislava. Instead, I spent the day touring Vienna while others rented bikes and started cycling. In the evening, I took a bus to Bratislava: at 7.7 euros it was cheaper than train and even transporting the bike was free. Buses to Bratislava leave from Südtiroler platz couple of kilometers south of city center. I was already sleeping in our hostel in Bratislava when my friends finally got there in the middle of the night.

I felt better than yesterday so after a combined breakfast and lunch we started cycling towards Győr in Hungary. There is a very nice paved cycling path that follows Danube through Dunajské luhy protected landscape area. Considering how many restaurants and cafés there are, it must be a very popular route. After a place called Čunovo near the Slovakian and Hungarian border we turned away from the river and after Bezenye village in Hungary we turned again southwest. There was a five kilometer long section of gravel road, which had old military shelters by it.

We had a coffee stop at Mosonmagyaróvár. I tried to order black coffee but got caffeine free espresso, since nobody really spoke English. Regardless of that, the owners of the cáfe were nice and we also got our water bottles filled. Rest of the day we cycled along paved cycle paths all the way to our destination Győr, where we had a hotel room booked. In the evening we enjoyed a dinner in a fine restaurant — quite different than the mobile kitchen which I am used to on my own cycling trips.

The goal of the day was to get back to the Slovakian side of the Danube, to Komárno. During the day we passed villages and fields. Roads were worse than before and there were less cycling paths. However, traffic was light. We cycled over the hilly fields and between the huge, slowly rotating rotors of the numerous wind turbines.

Soon we arrived at the village of Nagyszentjános after which we had to start cycle along a sandy and bumpy path that followed the railroad. Luckily we had wider tires than the couple we passed who were riding road bikes. After a few kilometers the path turned into a straight paved road full of potholes. We reached town of Ács where we planned to have lunch, but ended up in a pastry shop enjoying traditional Hungarian cakes. Nevertheless, the energy was soon needed as we had to return to unpaved path which lead us through woods. We arrived early to Komárom and crossed the Danube to Slovakian Komárno. The city had been split in two about hundred years ago. Accomodation was cheaper in Slovakian side and actually we ended up booking a suite there — quite different compared to living in a tent which I am used to on my own cycling trips.

The temperature was nearly 30 degrees, but the moderate south wind made it feel cooler. However, as we were travelling southeast it was blowing against us. In addition, we had to cycle on the main road since there was no cycle path. It was also hillier than before. We were already low on drinking water when we arrived in the first town, Tata, after 20 kilometers. From there we turned back towards the Danube.

Regardless of the backwind, it did not feel much easier since we had to cycle uphill until we reached the village of Dunaszentmiklós, where we stopped for lunch. Although, due to the language barrier, we did not exactly get what we ordered, we were soon ready to tackle the remaining 36 kilometers. The highest place during our whole trip, about 300 meters above sea level, was the Hilltop-Neszmély vineyard a couple of kilometers north of Dunaszentmiklós. From there we could see our destination, the city of Esztergom. Descent was fast: my ears were partly blocked and the brakes were hot to touch. We arrived at the bank of Danube and continued along a main road with moderate traffic. Luckily there was a cycle path after the town of Lábatlan. Mountains were visible on the horizon as we crossed the fields and villages by the Danube. Finally we arrived at a pension in Esztergom where we quickly met a Brazilian cyclist who had been cycling all the way from Switzerland. In the evening we went to a nearby restaurant, called Csulok Csarda, that turned out to be the best during our trip.

Another hot day began with our minds set on our final destination, Budapest. There was a nice stretch of cycling path on the bank of the Danube, but soon we had to return to the main road. After a few kilometers we arrived at ferry dock. The 'ferry' was actually a barge that was pushed by a tugboat. Despite a tad high three euro fee it was nice to actually 'feel' the river under your feet. On the northern side of the Danube, there was a very nice cycling path with great views to the river.

From the town of Nagymaros, we could see the Visegrád castle on top of a high hill. We cycled along bikeways until we reached the city of Vác, where we crossed the Danube again, this time with a real ferry. The fee was about the same as previously. We were getting hungry, but luckily a friendly local from the village of Tahitótfalu guided us to a restaurant there. After lunch we crossed the side channel of Danube, this time using a bridge. A 15 kilometer stretch of bikeway through green areas followed. As we crossed the border of Budapest more built-up areas started to appear. We cycled a few kilometers behind middle-aged German speaking touring cyclists. Soon we arrived at the center where our accomodation was situated. It was a private penthouse with great views over the city.

The last day was supposed to be easy. Others returned their rented bikes so we did some sigthseeing on foot. We considered going to a spa to mend our legs, but the prices were bit high. Finally others decided to take a metro to a cheaper spa while I had to start looking for a cardboard box for transporting my bike. Finding the box turned out to be much harder than I had thought. After visiting countless bike shops I finally managed to find one, but it was too small for my bike. However, it was still too wide for carrying on a bike so I gave it for my friends who were going to the airport using public transport.

The twenty kilometer long road to airport had heavy traffic but I took a detour through residential district. The last couple of kilometers I had to cycle on a motorway. Finally, I arrived at the airport where my friends were already waiting with the box. I had to dismantle the bike since it would have not otherwise fitted into the box. Nevertheless, the bike arrived undamaged with us to the dark, rainy and foggy Helsinki-Vantaa airport. There we were stopped by the Finnish border guard — apparently it may have looked a little suspicious seeing two foreigners and a bearded guy carrying a big box at the airport. Luckily I had a parked my car at the airport since it was pouring rain. Actually it was rather refreshing for a change: it did not rain a single time during our cycle trip.

All in all, the whole trip was quite relaxing compared to my usual bike travels that had involved lots of sweat, rain, wind and mental fighting — it felt almost like a holiday!
Lähettänyt pk klo 23.06 0 kommenttia